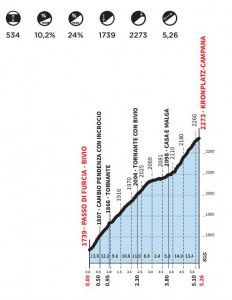 Other ways to reach the top: by gondola from Riscone, Valdaora or Passo Furcia 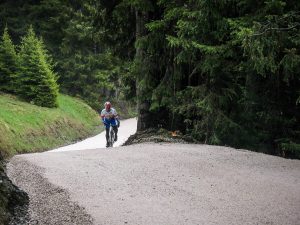 This is one of those climbs that you should do when you don’t have any other rides left to do, or if you just really want to weep and fight against gravity before putting your feet on the ground on the steepest parts of the climb. Yes, this climb is going to be brutal and even though I wrote that you should ride with the gear you are used to riding with in the FAQ section … Plan de Corones is an exception!

First of all, the Plan de Corones climb today is not like it was during the Giro d’Italia years. The special gravel that was prepared for the time trial isn’t there anymore and you’ll find loose gravel on many parts of the climb. That may not be a problem during the climb, but this makes it tough when it’s time to turn around and ride it on the way down. 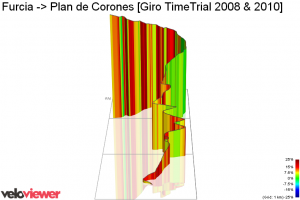 But, let’s start from the beginning. It all starts once you reach Passo Furcia (Valdaora side or San Vigilio side). Getting here is already an effort in itself because the Furcia is considered one of the hardest climbs around. Plan de Corones starts near a tiny chapel with the inscription “Ave Maria” above the door… and, yes… it’s time to pray from now on!

As soon you turn left onto the narrow road towards Plan de Corones you’ll be welcomed with a 20% grade! It is also hard to do any zig-zagging up this section because the road is so narrow that zig-zagging won’t be of any help. It might help you to know that the road flattens a bit (continuing at 14%) after this first steep section and then the first hairpins begin. All the hairpins are dedicated to past winners of the Giro d’Italia. Instead of counting, you can learn their names from the bottom hairpin to the the top: 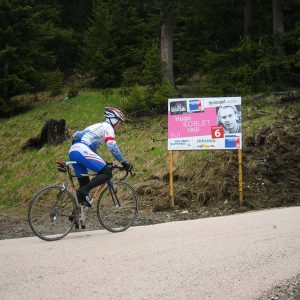 After the first 3 hairpins you’ll be riding on the gravel road surrounded by fir and larch trees. This part is not so steep (compared to the rest of the climb) since the average grade for 1.8 km is 12% and, after that, you’re out of it and you’ll find a nice flat in front of you.  You can see a gondola in the distance and, beneath it, a steep road going up to the left. You’ll be hoping this isn’t the road you have to ride but, remember, you left all your hopes back at the beginning of the climb when you saw “Ave Maria” written on the chapel! The steep section starts at the hairpin dedicated to Marco Pantani and here is where the last 900 meters begin. Yes, just 900 meters, but with 160 meters of elevation gain! The maximum grade is 24% and the road only flattens to a ‘gentle’ 12% once at the top, before you see the huge Concordia Bell. 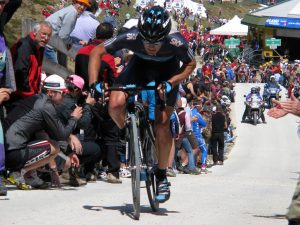 Now, what should you do once you’re up there? You can either ride down the same road or, if you want to save your break pads or wheels, you can take the ‘Ruis’ gondola that takes you back to Passo Furcia.

During the Giro d’Italia stage in 2008, I was on the course filming some videos for the regional TV. Luckily, a friend of mine was there with me and also shot a video which I’m sharing with you here:

Have you also ridden this climb? What were your thoughts and feelings as you were climbing?
Share them in the comments section at the end of this post.