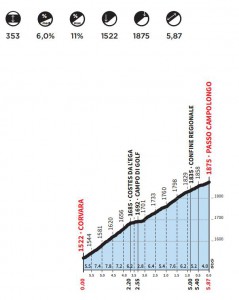 Strava segment: -link-
Times Giro d’Italia passed the Campolongo: 14
Water fountains: 1 – at the beginning of the climb near the old church of Corvara
2 – after 2.3 km on the flat part near the Golf course 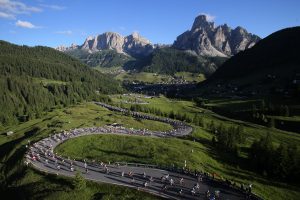 The Campolongo is perhaps considered by most cyclists as an Ugly Duckling compared to all the other climbs around. It’s one of the lowest climbs in the Dolomites with an altitude of only 1,875 m. But, the Campolongo has some really unique and uncommon characteristics that set it apart. For cyclists, this is the best pass if you want to learn how to ride hairpins and improve your downhill skills, plus, it’s great terrain to practice repetitions uphill. If there was one climb that I rode the most during my racing years, it’s the Campolongo from the Corvara side. Starting from home, I’d get a nice warm up in the easy 8 km climb towards the pass and then my program log just said sprints, sprints and sprints.

Another special feature is the road itself. While most Dolomite passes have flat or nearly-flat hairpins where you can only gain elevation on the straights, the first part of the Campolongo is just the opposite. The straights aren’t that steep but the hairpins are! Most of the time, it feels like the straights are steep because your legs are tired after riding the hairpins out of the saddle in order leave them behind. And, yes, sprinting from hairpin to hairpin is very good training. 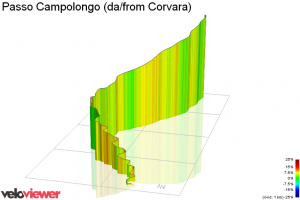 This side of the Campolongo lies on a permanent moving landslide – just a few cm a year that make the road look like Swiss cheese in spring. It gets paved around mid-June (shortly before the Maratona dles Dolomites) every year so it’s nice to ride it in the following months once again.

This is also the first climb of the Maratona dles Dolomites. You can see in the picture above that there is a 45-minute-long snake of cyclists climbing it early in the morning.

Once you ride the first half with all the hairpins, you get to a short flat section that goes by the Alta Badia golf course. After this, there are 2 more hairpins and you’ll be on the last, 2.5 km-long straight towards the peak of the pass. It’s not steep, but because this part is no longer protected by trees or turns, you might be suffering a bit longer if you get some headwind.

Once you are at the top, you can finally enjoy the descent towards Arabba:

Have you ever ridden this climb? What were your thoughts and feelings as you were climbing?
Share them in the comments section at the end of this post.