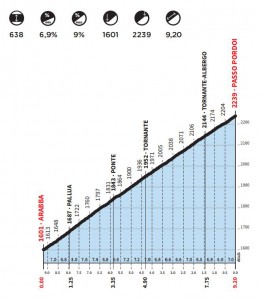 Strava segment: -link-
Times Giro d’Italia passed the Pordoi: 38
Water fountains: 1 – at the beginning of the climb near the church in Arabba 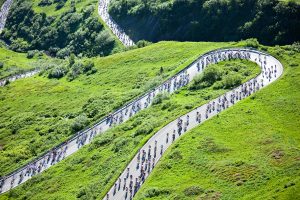 We already wrote about the “Great Dolomites Road” in the section about the Pordoi climb from Canazei (read here). On the Arabba side, the engineer just did the same great job – a climb with an average grade that never goes above 7%. If you look at the elevation profile in the chart above, it’s just a straight line from Arabba to the top of the Pordoi.

On paper, this looks like an easy ride … but … it’s totally different from the Canazei side. If there is vegetation and trees all the way up to 2000 meters on that side, the trees disappear around 1601 m. on the Arabba side, and you’re left with green pastures and some shrubs here and there.  Some cyclists might say, “Who cares? The view is better!” 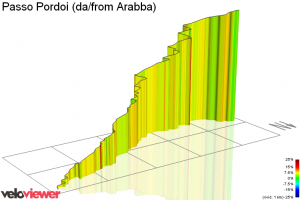 Of course, that’s true – until wind doesn’t get in game and, like the Campolongo climb from Arabba, wind decides the pace of your climb. On the first 3.5 km of the Pordoi, you just have 4 series of hairpins with a few long straights in between. If you get headwind here at the beginning, it’ll be tough the whole way to the top.

After the 3.5 km, the real hairpin gut of the Pordoi starts: 22 hairpins in 4.5 km! This is an average of 1 hairpin every 200 meters! It’s like a rollercoaster, only that you don’t use the force of gravity to reach the next hairpin – you fight against it. If you ride this route in low season, you’ll hear whistling. These are your fans: marmots! On early morning or late afternoon rides, you might see them crossing the road right in front of your wheels.

In the last km up to the top of the Pordoi, let the wind decide your pace again. If you find yourself fighting against headwind, then look back and see what you’ve left behind.

Have you ever ridden this climb? What were your thoughts and feelings while you were climbing?
Share them in the comments section at the end of this post.